In earlier considerations, the thickness of the layer and the contents of the sediment in the lake were still unknown. It was assumed that its bottom was made of porous limestone, and therefore estimated that the lake and its springs were salty because of the sea water which was leaking into the terrain through the wide area of Prosika.

Later research has shown that the thickness of watertight quaternary sediments is up to 30 m below the lake. The major part of its bottom is built of tight marl Eocene limestone which prevents the inflow of sea water deeper into the land beneath the lake from the area around Prosika. Sea water might easily penetrate deeper into the land and through the limestone on the north-eastern shores of the lake, but the springs and the land are probably not salty in that area. A sample was obtained in the Lateral canal during the dry part of the year, which proved that salinity was not above 50 mg Cl/l.

Taking all these facts into consideration, we can almost surely assume that salt in the brackish springs of Vransko Lake comes from the Biograd area through the limestone between two basin barriers north of Biograd. 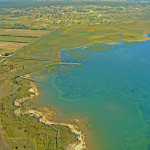 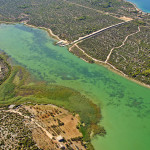 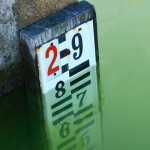