Characteristics of the Vransko Lake

Vransko jezero is the largest natural lake in Croatia, covering the area of 30,2 km², it is 13,6 km long, and 1,4-3,4 km wide. It stretches parallel with the sea coast in direction northwest-southeast, separated from the sea by 800-2500 m wide limestone ridge on altitude of 113 m above the sea level.

Vransko Lake is a karst field filled with water, and by its position to the world sea level it is a cryptodepression (-4 m). It is elongated and shallow, 2-6 m deep, the shallowest in the northwestern part (0,5-1 m) where it is covered with sedge and reed, and deepest on southeast (4-6 m). In regard to water column mixing frequency, the lake is polymictic (water is constantly mixing).

Water level is not stabile and it depends on the amount of precipitation during the year in the whole lake basin. Water level varies between 1-2 m, with the highest water inflow in spring, and lowest in summer.

Bental (there is only litoral area) is almost entirely covered with detritus layers of light gray mud which is aerobic according to past research. On east and south side of the lake, bottom consists of rocks.

Water current is conductive with waves up to 1 m high caused by southeast and northwest winds. Currents are not strong because of small water column, meaning there is no significant difference in physical and chemical composition of water on surface and at the bottom.

Because the lake is shallow, it is subjected to sudden change in temperature depending on the air temperature, from 2,9°C in February to 25,2°C in July. Occasionally, due to polar air mass, lake freezes on the surface together with surrounding shore, however, peripheral band around the channel and springs never freezes because temperature of springs is around 9,2-17°C, which confirms the belief that the influx of fresh water from the mainland prevents freezing of the lake.

Water quality
Lake water is slightly brackish, with salinity from 0.16 to 0.86 ‰. Salt comes from brackish springs in Vransko field where sea water penetrates from the Biograd area and through underground routes in Modravice area. During dry years and low water levels, large amounts of sea water penetrates through Prosika canal.

Biological and chemical indicators show that the water quality is at the border of oligotrophic (type II) and mezotrophic (type II). Studies during the 60’s showed that the lake was oligotrophic, however, although the amount of dissolved oxygen remains at a high level, a decline of water quality has recently been noticed. It is assumed that the cause of the increased lake trophy, reflected by intense green color and algae blooming, is caused by a larger inflow of nutrients from the agricultural fields of the Vrana basin.

Vransko Lake bottom
In a narrow band at the eastern and southern part of the lake the bottom is rocky. Beside this narrow strip, the bottom of the lake is covered with thick layer of light gray mud and fine sand, which contains large amounts of lime (80%). These lime particles are brought in by the water from streams and springs. Mud in the lake is detritus due to particle deposition, which are brought in the lake as a consequence of the lake water regime and water movement. Water carries a large amount of inorganic and organic material, and together with the warming of relatively shallow waters of the lake and the assimilation process of lake vegetation, chemical and biological processes that create the characteristic sediments take place. According to previous research, bottom of the lake is aerobic. 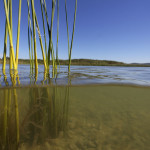 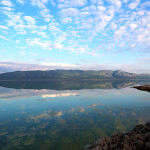 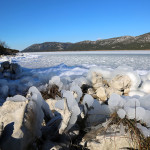 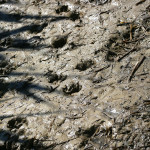 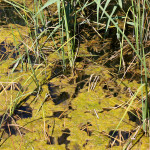