Vransko jezero is the largest natural lake in Croatia. It represents the lowest point of the area and as such collects nearly half of all the surface flows of Ravni Kotari. However, the water of the lake is brackish, as the lake constantly communicates with the sea through the porous karstic ridge at its western part, as well as the man-made channel at its southwestern part – Prosika. The lake belongs to the Mediterranean subarea of the Palearctic biogeographical region.

The northern part of the Park is of great importance thanks to its high biological and habitat diversity. It comprises one of the last Mediterranean wetlands, as well as the flooded area of Jasen. The wetland of Vransko jezero has been declared as one of the Ramsar sites in 2013 and was added to the list of the most important wetland areas in the world, although the wetland today is ten times smaller than its original size. The uniqueness of this area has been recognized in 1983 when the wetland area of the lake has been declared as an ornithological reserve. Within the ornithological reserve, thick covers of reed beds, rich moist and aquatic habitats offer shade and microhabitats for breeding or spawning to a large number of different organisms. Besides a very diverse avifauna, the wider area of the Park offers a home to many other species of vertebrates and invertebrates.

MALACOFAUNA: A total of 15 species of aquatic snails and 6 species of shellfish have been found in the lake, two main freshwater canals and the pond Benča. The freshwater snail, Anisus vorticulus was found in the pond, the last of its kind found within the boundaries of the Nature Park. This snail is a rare and Endangered (EN) species in the territory of Croatia. The other two locations where it can be found are the river Krka and the old branches of the river Mura. Anisus vorticulus lives in clear and stagnant or slow-flowing waters with plenty of aquatic vegetation. It belongs to pulmonate snails, which means that it breads through lungs and in the active period goes to the surface for air. In adverse conditions of low temperatures, drought and/or high salinity, the species may hibernate or aestivate buried in the substrate.

SPIDERS: 133 species of spiders have been found in the Park, of which as many as 15 have been recorded in Croatia for the first time. The greatest diversity of spiders has been observed in the area of Velike njive, along the east coast of the Park, where a large number of different microhabitats are located. Spiders make up a large part of biomass in all types of habitats. Spiders are predators on insects and they control the size of their populations, which is why we consider them natural insecticides.

BUTTERFLIES: 42 species of butterflies have been recorded in the Park so far, of which the Swallowtail (Papilio machaon) is listed as a strictly protected species. Swallowtail and Green-underside Blue (Glaucopsyche alexis), which was also recorded in the Park, are categorized as Near Threatened (NT) according to valid Croatian Red Butterfly List. The reason why there are relatively few species of butterflies in the Park is the large anthropogenic impact on terrestrial ecosystems in its marginal parts. 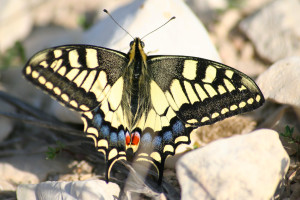 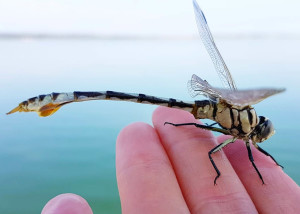 DRAGONFLIES: These excellent fliers make important biological indicators that testify the quality of the water body in which they lay their eggs and where their larvae develop. The study identified 33 species of dragonflies in the Park area. One of the species recorded, the Bladetail (Lindenia tetraphylla) is Endangered (EN) and strictly protected in Croatia, as well as throughout Europe. It is a large, migratory species, widespread in Europe, where it can be found around large freshwater habitats near the Mediterranean Sea. Beside Vransko jezero, the species can be found along the shallow lakes of Krka, Pag and the delta of river Neretva. Adult individuals are active from late May to late August. It is easy to identify them by the thickened seventh abdominal segment.

GROUND BEETLES: Inventory of ground beetles, one of the most numerous groups of beetles, has revealed that there are 75 species in the Park area, of which as many as 18 species are on the Croatian Red List. Ground beetles are good bioindicators because they are sensitive to changes in the environment, whether in physical or chemical parameters. Almost all above-ground habitats, upper soil layers and most of the underground habitats are inhabited.

FISH: Freshwater and marine fish species are present in the brackish waters of Vransko jezero. According to a recent study, the total number of fish species in the lake is 20. While some species recorded in the literature have not been found. Of the freshwater species, only four are native, meaning they occur naturally in the lake, and they are European Eel (Anguilla anguilla), Freshwater Blenny (Salaria fluviatilis), Adriatic Dwarf Goby (Knipowitschia panizzae), Dalmatian Rudd (Scardinius dergle). European Eel is strictly protected species and it is critically Endangered (CR) at European level. The list of strictly protected fish species includes the Freshwater Blenny, which is also a Vulnerable species (VU) and the Dalmatian Rudd, a Near Threatened (NT) endemic of the Adriatic basin considered to be endangered due to it’s scattered distribution. Other fish species in the lake are allochtonous or non-native and were intentionally or accidentally introduced from another ecosystem. These include, for example, Carp (Cyprinus carpio), intentionally introduced as early as 1949, Prussian Carp (Carassius gibelio), Catfish (Silurus glanis), Pike (Esox lucius), Pumpkinseed (Lepomis gibbosus) and Western Mosquitofish (Gambusia affinis), which was introduced because it feeds on mosquito larvae and thus controls their abundance, and others. Prussian Carp, Pumpkinseed and Western Mosquitofish are invasive species. Of the marine species that occasionally use brackish water of Vransko jezero, the most common are mullets.

AMPHIBIANS: There are 8 species of amphibians listed for Vransko jezero. Strictly protected species are the European Tree Frog, (Hyla arborea), Agile frog (Rana dalmatina) and The Marsh Frog (Pelophylax ridibundus). Populations of the European Green Toad (Bufo viridis) and the Common Toad (Bufo bufo) are subjects to greater fluctuations. The Fire Salamander (Salamandra salamandra) and the Smooth Newt (Lissotriton vulgaris) are found rarely. The endemic subspecies of the frog that can be found in the area of Vransko jezero is the Yellow-bellied Toad (Bombina variegata kolombatovici), which is Near Threatened (NT). 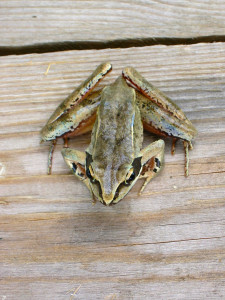 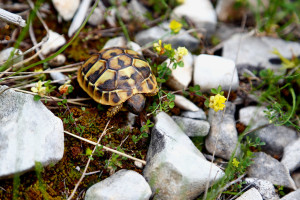 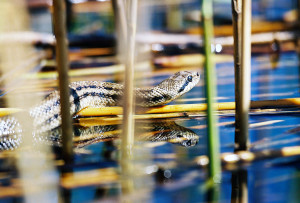 MAMMALS: The mammal fauna of Vransko jezero is a typical fauna of Dalmatia. A relatively large number of mammals are present in this area due to the great amount of food and water available. Mammals are very important because they are at the very top of the food web. The most numerous mammals recorded in this area are rodents, insects, bats and canines, while the number of mammals that inhabit aquatic and wetland habitats is much smaller. A total of 37 species, or about 40% of the mammalian fauna of Croatia, are present. The strictly protected species of mammals recorded in the Park are the Greater Horshoe Bat (Rhinolophus ferrumequinum), Greater Mouse-eared Bat (Myotis myotis), which are also Near Threatened (NT), Mediterranean Horseshoe Bat (Rhinolophus euryale), which is a Vulnerable (VU) species, the Long-fingered Bat (Myotis capaccinii), which is an Endangered (EN) species, Kolombatovic’s Long-eared Bat (Plecotus kolombatovici) and the Wildcat (Felis silvestris). Endemic taxa that can be found in the surroundings of Vransko jezero are the subspecies of the Garden Dormouse (Eliomys quercinus dalmaticus) and Kolombatovic’s Long-eared Bat (Plecotus kolombatovici). Animals of the canine family, like the Western Polecat (Mustela putorius), Least Weasel (Mustela nivalis), Beech Marten (Martes foina), Eurasian badger (Meles meles), Golden jackal (Canis aureus), Red fox (Vulpes vulpes) and others are present. Representatives of other mammalian groups are the Long-tailed Field Mouse (Apodemus sylvaticus), Edible Dormouse (Glis glis), Southern White-breasted Hedgehog (Erinaceus concolor), Lesser shrew (Crocidura suaveolens), European Hare (Lepus europaeus), as a Near Threatened (NT) species and the Wild Boar (Sus scrofa). 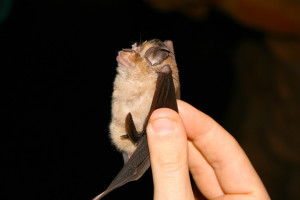 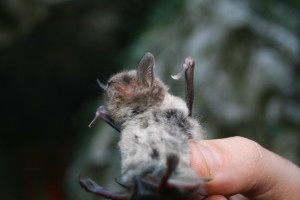